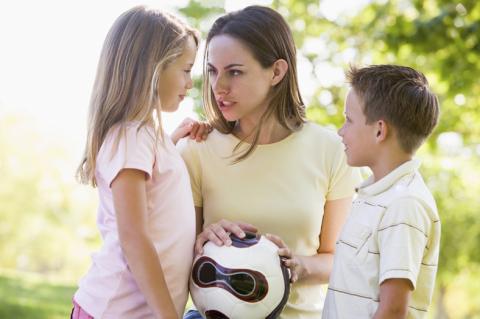 Some conflicts are a fact of life. After all, children are still learning how to get along. When they do happen, the main thing is to stop the children before somebody gets hurt or goes too far. Then it’s time to help them deal with the issues in a constructive way.

Four steps for breaking up fights

Treat all children fairly, in a way that’s reasonable for their age and skills. Fair treatment isn’t necessarily the same treatment. For example, it might not be possible to treat a six-year-old and a two-year-old the same.

No negative comparisons. Handling the emotions that go along with conflict is difficult for everybody. Try to bite your tongue if you feel like criticizing an older child for “not knowing better” or calling another “a troublemaker”. It won’t help, and your child might feel hurt or resentful.

Identify the cause of conflict, so you can choose the best way to deal with it. For example, if a child has taken a toy from a sibling, you need to step in. If you don’t, the child learns that taking things is a way to get what you want. Keeping an eye on your kids is the secret to knowing the reason for the conflict and deciding on the right consequence.

Let your family rules do the work for you. If children understand your expectations, it’s much easier for you to follow through consistently.

Have a game plan. Not all conflicts are equal. It can help to plan how you’ll handle smaller disagreements as well as bigger conflicts. Work out different consequences for different issues.

Consequences can be an effective form of discipline when kids can’t work the problem out on their own, and you need to step in to resolve the issue.

Here’s how you can use consequences when kids are in the middle of conflict:

Consequences that are short and immediate work best. Half an hour without a favourite toy, a night without a favourite TV program, or a few minutes of quiet time should be long enough to get the message across. The point of the discipline isn’t to punish kids, but to help them understand that there are clear, negative consequences for inappropriate behaviour.

Tip: The steps above are recommended for children three years and over. Younger children might still find it very hard to control their emotions and behaviour, and might not understand consequences. With younger children, distraction can work better.

Handling your own emotions

Your stress levels might shoot up when conflict occurs, but staying calm can really help. Many parents say that if they’re tense, the situation just seems to get worse. But some issues will bother you more than others, and some days you’ll find yourself getting upset more quickly. Give yourself a break – you’re human.

Here’s a quick tip that can help if your children’s conflicts are making you feel hot under the collar: stop, count to 10, and then act.

That extra 10 seconds is often enough to calm your emotions. If this doesn’t help, you might want to ask another adult to handle things while you take some time out.

Steps to take after the fight

What you do after a conflict can help children learn how to solve their own problems in the future. For best results, wait until tempers have cooled and children are ready to reason again.

When to seek help

Conflict is a problem when it is unchecked, frequent or hurtful. This can be distressing for children and can contribute to future problems with relationships. In contrast, supportive relationships with siblings, family and friends help kids cope with negative experiences later in life.

If you’re feeling overwhelmed or stressed by conflict, it’s worth getting support. You could start by talking to family, friends and other parents.

It’s much easier to nip challenging conflicts in the bud than to let a pattern of behaviour develop.