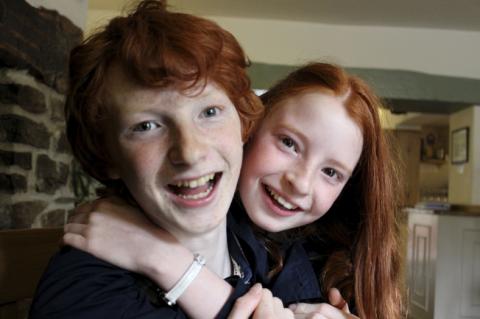 Sometimes teenagers seem to fight all the time. If you approach these conflicts in a constructive way, you can help your child learn important skills for adult life.

Sibling conflict: what you need to know

“Who said you could wear my clothes?” “Get out of my room!” “You’ve been on the computer for hours!”

It’s normal for teenage siblings to have conflicts over all sorts of things. Teenage siblings argue just as much as younger children, but they tend to fight about different things. They might also use different and more grown-up language.

Sibling fighting can be stressful for parents, but it has a useful purpose. When children interact with parents, they learn about authority. Interactions between brothers and sisters help them learn about relating to peers.

Also, if it’s handled the right way, sibling conflict can help children learn important life skills, such as how to:

Here are some suggestions for handling conflicts between teenage siblings.

Resolving arguments teaches children essential life skills, so avoid always stepping in to solve the problem for them - even though it might be faster and less stressful to fix the issue yourself. Try asking your children to listen to each other’s perspective. Then guide them towards a compromise.

If your children need some help with conflict, coach them through it. Clarify what they’re arguing about, ask them what they each want, and prompt them to come up with solutions together.

Motivate your children to resolve the fight themselves. For example, if they’re fighting over the computer, take away their access to it until they can work out a solution together.

Keeping track of how the fights get resolved will help you make sure one child isn’t dominating the other. Make sure that compromise does happen, and that they’re each getting something. If they can’t compromise, create a consequence for both of them.

If they’re fighting, they’re both responsible. So look at what the conflict is about rather than focusing on who started it.

If you take sides, one child might feel unfairly treated and feel you’re showing favouritism. It’s better to get both teenagers to state their problems, and then brainstorm possible solutions.

Note: violent fights can damage the long-term relationship between siblings. You need to step in if your children are being violent.

Listening to children’s fights can be infuriating and stressful, but this stage will pass. They might be fighting today, but siblings can offer each other support and protection at other times. Sibling squabbles can also help your children learn to be better friends, partners and workmates later in life.