Good listening skills are fundamental to any relationship, especially your relationship with your teenager. Taking the time to really listen to your teen shows them you respect their thoughts, opinions, and helps build trust. Here’s an example of how to practise good listening while talking about drinking and substance use. 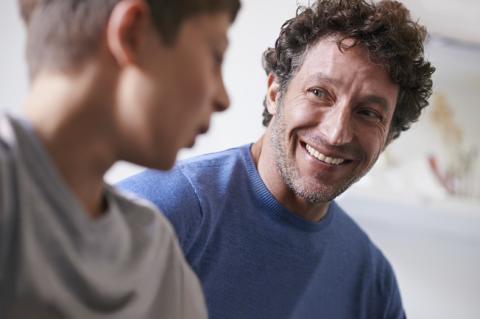 You know you’re practising good listening skills when you could strip away your part of the conversation and the other person’s story flows and finds its own form of resolution. Here’s an example:

A teen is putting on her shoes, getting ready to leave for school. Mom notices that the friend her teen usually walks to school with isn’t waiting in the foyer. Come to think of it, the friend didn’t show up the day before either.

Teen: She’s not allowed to come over here anymore.

Teen: Because of my birthday party.

Parent: What happened at your party?

Teen: Nothing. Well, you know. We were drinking. Her mom’s pretty religious.

Parent: She doesn’t want her to come here because she thinks you - or we - are a bad influence on Diana.

Teen: I guess so. She lied about where she was going. She told her mom she was going to Sherry’s. When her mom found out Diana lied, she was really mad.

Parent: She’s mad at Diana because she lied to her about going drinking.

Teen: Something like that. I don’t know why they’re mad at me. I didn’t lie to my parents. I asked you if we could drink some beer and you said yes.

Teen: Well, I guess she couldn’t have just asked her mom if she could drink. There’s no way she’d say yes. Diana’s dad has a drinking problem.

Parent: She’s worried her daughter will have a drinking problem too.

Teen: I guess I can see why she’d be mad about my party. Maybe I should go talk to her and tell her I’m sorry. I’ll explain that I had talked to you about it before the party and that you were with us whole time to make sure nothing bad happened.

Parent: Diana’s friendship is important to you.

Teen: I really wanted her to come to my party. And I didn’t know she had lied to her mom until after the party. I didn’t want Diana to get in trouble or have her mom mad at me. Maybe, if we have a party here again, I won’t pressure Diana to come so that she won’t feel like she has to lie to her mom. And we could have it so there’s no drinking, that way Diana would be allowed to come anyway!

Talk When it Makes Sense

Every child is different, and there is no “right time” to start the conversation about alcohol or other drugs. But engaging children early in open exchange about the things that touch their lives is a supportive way to help them address those things.

Even young children know alcohol is a part of society. They see people drinking around them and are exposed to alcohol on T.V. and in advertising. This can make it easier to bring up naturally. Try bringing up the topic of alcohol while:

Talk with teens and young adults about alcohol or other drugs as they make choices on the path into adulthood to help them develop personal standards, minimize risks and critically assess popular assumptions about substance use. This can be particularly important as they head towards the legal drinking age and move out of the family home. While young adults have more independence and more legal rights, you continue to be an important sounding board on which to try their thoughts and ideas.