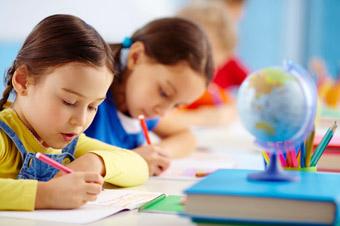 During the early school years, children learn more and longer words. They become more skilled at putting words together in new and imaginative ways.  At this age, they also become more familiar with how language sounds, and how sounds combine to make words.

Here are some of the ways your children’s language and communication skills develop in the early school years.

By 5 years, children are aware of the sounds that make up words. They can identify words that rhyme. They might even play rhyming games and sing out a list of words that rhyme (bat, cat, fat, hat, mat...).

Children begin to learn the sounds that go with the different letters of the alphabet. This is important for the development of reading skills. Children also become aware that single sounds combine into words. For example, when the “t”, “o” and “p” sounds are put together, they make the word “top”.

Did you know?
When starting school, children might still have problems saying a few sounds. An example is the “r” sound, particularly in words like “truck”, “drain”, “bring” and so on.

By 5 years, children will usually use the correct form of verbs to talk about past events. For example, “I jumped”, or “I played”. But it will take a few more years for them to get used to the many exceptions in the English language – for example, “broke”, “threw” and “ate” rather than “breaked”, “throwed” and “eated”. Even at eight, children might find the past tense of some verbs tricky.

From the ages of 5-6 years, children understand that single words might have different meanings. They start to rely more on the context of a word to find a particular meaning. For example, “cool” means something different when you say, “It’s a cool day”, compared with when you say, “That’s a really cool robot you’ve built”. They begin to understand non-literal meanings – for example, “make up your mind”.

Your child will understand that new words can be formed by joining two words – for example, “bookshelf”. “Compound” words like this become more frequent in children’s speech from 5-6 years. Your child will also use longer words as she gets to know endings that change the meaning of words. For example, when you add “er”, it changes a verb into a noun. So “teach” becomes “teacher”.

Your child will also start to understand that words don’t always need an “s” to become plurals – for example, “feet” and “mice” rather than “foots” and “mouses”.

From 6 years on, children start to use prefixes (word beginnings) and suffixes (word endings) to make more words. So they can use “ness” (as in “happiness”) and “un” (as in “unwrap”).

At this age, children might also have trouble understanding who pronouns refer to – for example, who “she” refers to in the sentence, “The woman told the last girl to arrive that she was late”. This understanding improves gradually with age.

From 4-8 years, children’s narrative skills improve and they get much better at telling stories. Their stories get longer and more detailed. The stories might be made up, or about things that have actually happened. It also becomes easier to work out who children are talking about when they’re telling a story, and how the events in their stories fit together.

In these years, children learn to:

Did you know?
Children grow and develop at different rates. The information in this article is offered as a guide only. If you’re at all concerned about your child’s language development, speak with your child’s teacher, doctor or public health nurse.