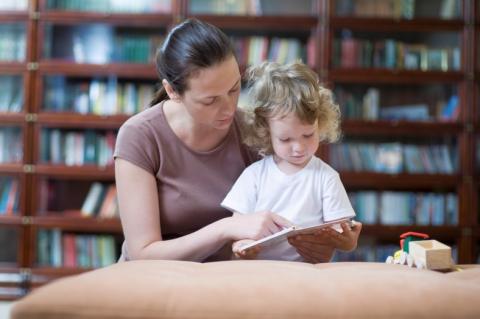 Now that your child’s a preschooler, you can expect longer, more complex conversations about all sorts of things. His vocabulary will continue to grow, and he might show that he understands the basic rules of grammar. You can also look forward to some entertaining stories!

Here are some of the things your preschooler might do as her language and communication skills develop from 3-4 years.

Your child will learn thousands of new words. He learns words by listening to you and other adults and guessing from context. He also learns from new experiences and from listening to stories. He understands many more words than he says.

She’ll learn and use more connecting words (such as ‘because’, ‘and’, ‘if’). She’ll also learn more and more number words, words about emotions, names for groups of things like ‘vegetables’ and ‘animals’ and family terms like (‘aunty’ and ‘brother’). By age four, she’ll start to develop an understanding of some contrasting concepts, such as longer and bigger.

Did you know? Reading to your child is an important activity in supporting speech and language development. Reading regularly to your child from an early age helps build a stronger relationship, supports speech development, reading and school performance.

Your child might begin to use more complex sentences that include words such as ‘because’ and ‘that’ – for example, ‘I don’t like that because it’s yucky’.

He’ll show that he understands the basic rules of language. And he’ll often apply these rules strictly across all examples, not realizing how often English breaks its own rules. For example, ‘He runned away’, or ‘There were lots of sheeps’.

She’ll usually order words correctly in questions and when using negatives – for example, ‘Am I going?’ or ‘I don’t like it’.

At this age, your child might tell stories that follow a theme and often have a beginning and end.

Your child might reason, predict things and start to express empathy. She’ll also use lots of ‘why’ and ‘how’ questions to find out more about her world – so try to be patient!

As your child gets closer to four, he might start conversations using questions such as ‘Guess what?’ He’ll talk about a wider range of things, as well as more complex topics. For example, ‘If it keeps raining, will we have to build a boat to get to Grandma’s?’

By age four, she’ll be understood by most adults, although she might not pronounce some of her words the right way. She might still have difficulty pronouncing words that include the sounds ‘l’, ‘th’ or ‘r’.

When your child doesn’t understand, he might ask for an explanation, or ask what words mean.

She’ll understand directions that have more than two steps, as long as they’re about familiar things – for example, ‘Turn off the TV, put on your pyjamas and hop into bed’.

Your child will understand questions most of the time, especially if they’re about something that’s happening right now, or that he can see. He’ll also understand slightly complicated explanations, as long as he can see the results himself. For example, he’ll understand an explanation such as, ‘When the sun shines on things, it makes them warm.

By now, your child will be able to do some simple negotiation with other children. For example, who will play with a certain toy first.

By age four, your child will begin to use language in role play. He can pretend to be ‘daddy’ and imitate dad’s tone and words. Your child might also create imaginary characters.

Tip: Children grow and develop at different rates. The information in this article is offered as a guide only. If you’re at all concerned about your child’s language development, check with your public health nurse or doctor.