Emotional support, information and resources specific to mental health are available from Mental Health Support offered by the Crisis Lines Association of British Columbia by calling 310-6789. You may also visit BC Mental Health & Addiction Services or HereToHelp for additional resources and services. Children and teens can also call the Kids Help Phone to speak to a counsellor at 1-800-668-6868 or visit Kids Help Phone for information on the resources and support available.

Suicide assessment and intervention are available from Crisis Lines across British Columbia by calling the Crisis Line Association of British Columbia at 1-800-784-2433 (1-800-SUICIDE). For more places to get help, visit Crisis Centre – Get Help. If you are in an emergency, call 9-1-1.

What to watch for

It is hard to know if someone is thinking about suicide. But past history or events may make suicide more likely.

Things that can make suicide more likely include:

Warning signs of suicide include someone:

Adapted By: HealthLink BC

Adaptation Reviewed By: HealthLink BC

Adapted By: HealthLink BC

Adaptation Reviewed By: HealthLink BC

HealthLinkBC Files are easy-to-understand fact sheets on a range of public health and safety topics including disease prevention and immunizations.

If you are looking for health services in your community, you can use the HealthLinkBC Directory to find hospitals, clinics, and other resources. 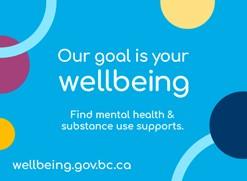 The wellbeing website helps people from all over British Columbia access supports and resources for mental health and substance use. Sometimes, you don’t know where to start. wellbeing.gov.bc.ca will help you access the right supports, at the right time that meet you where you are at.